An update from the South Georgia delegation (April 2, 2021)

There are many moving pieces in our denomination right now. And it is challenging to stay on top of the most current information. With that in mind, I hope this update is helpful. Let me share some key dates, what’s been happening, and what’s ahead.

May 8, 2021: Virtual General Conference canceled by the Council of Bishops

Many believe that a Jurisdictional Conference can only take place after a General Conference. That has been our practice in the past, but there is talk of holding a one day, called SEJ Conference in July, if allowed.

We say “possible” here because our Conference leaders are carefully watching CDC recommendations regarding crowds and the pandemic, vaccination availability, etc. as well as tracking General Conference updates.

These are the significant dates we know about at this time.

A Process for Preparation for South Georgia

Separation of the United Methodist Church is looming on the horizon. In light of the postponement of General Conference until 2022, the delegation has revisited the document, “A Process for Preparation,” which was shared at the 2020 Annual Conference Session in order to update the process to fit the newly announced dates for General Conference.

The goal of this plan is to help South Georgia prepare to make a wise, prayerful decision about the future affiliation of the South Georgia Annual Conference. The delegation is currently sharing its thinking with the Leadership Forum Task Force, the Compass Group, the Appointive Cabinet, and the Laity Cabinet in order to invite those groups to speak into the updating of “A Process of Preparation.” We anticipate completing this collaborative work during April so the updated version of “A Process for Preparation” can be shared in May, ahead of the June 7 Annual Conference session.

The Protocol of Reconciliation and Grace Through Separation

Diverse advocacy groups such as Good News and UMC Next, representing both Traditional and Progressive camps, endorse the Protocol.

Due to its broad range of support throughout The United Methodist Church, it seemed highly likely that the Protocol would have passed at General Conference 2020. This would have allowed those who want to maintain the Book of Discipline’s stance on human sexuality and those who wish to change those standards, to separate in a peaceful, organized manner.

The South Georgia Delegation has joined the heads of delegations of the SEJ and others in recommending and endorsing this work. We have additionally sent a statement to the Commission on the General Conference urging the Protocol to be considered at the earliest date possible, whether that be by a virtual General Conference or in person.

The Traditional Methodist Church (Global Methodist Church) will continue to uphold our current Doctrinal Standards including the traditional view of marriage between one man and one woman. And while loving all people, it “considers the practice of homosexuality to be incompatible with Christian teaching” as the Book of Discipline now states.

The post-separation United Methodist Church is expected to change the Book of Discipline’s prohibitions on the consecration of bishops and clergy with homosexual partners, the blessing of same gender marriages, and the ordination of practicing LGBTQ persons into ordained ministry.

Much of the conflict within The United Methodist Church since 1972 has evolved around LGBTQ issues. But for those of us who have been engaged in this conversation for a while, we believe the division is much more significant than this one topic. Sacred beliefs, such as Jesus being God’s son, born of the virgin Mary, His redemptive sacrifice on the cross, and the physical, real resurrection…not a metaphor, not an illustration, but literally, Jesus crucified, dead and buried and that he rose again…these beliefs are being challenged by a growing number of progressive leaders within The United Methodist Church.

In recent years to present day, this progressive leadership, which now includes some bishops, has become more and more defiant of our General Conference decisions, openly ignoring and disobeying our agreed upon Book of Discipline.

We are striving to reach a fair conclusion for all…for those with whom we agree theologically and with those with whom we disagree. We are working to treat everyone with dignity and respect and to “disagree without becoming disagreeable” with our actions and words.

By following the path laid out by the Protocol for Separation, every local church and Annual Conference can choose the best way to serve God according to their conscience and separate peacefully.

Of course, we thought we’d be further along in this process by now but the pandemic and related travel restrictions have caused General Conference to be postponed until August, 2022. As we move toward that date, the delegation is open to your thoughts and questions, and we certainly solicit your prayers as we seek God’s wisdom and will.

Blessings and peace to South Georgia in Jesus Christ our Lord!

Whether meeting in person or virtually, South Georgia’s delegation urged that The Protocol – a mediated proposal for the future of The United Methodist Church that allows each part of the Church to remain true to its theological understanding while recognizing the dignity, equality, integrity, and respect of every person – be brought before the body immediately following adoption of organizing motions.

“In regards to holding the General Conference being planned for later this year and setting the agenda, lay and clergy have consistently expressed to us their desire for our beloved church to discern, discuss and move past the issues that have caused hurt and distraction away from our mission and witness. While there are necessary items of maintaining ministry that will be before us, discussing the future of the church is vital. To delay that discussion does harm to countless local churches and their leaders around the world,” the letter stated.

The delegation also expressed its gratitude for the holy work being done by the Commission to prepare for the 2021 General Conference session.

“Every member of our delegation signed this message of appreciation for the work of the Commission. This is a time when clarity around how to safely and easily meet is difficult to find, yet we know they are doing their best,” said clergy delegate Rev. Dr. Scott Hagan, senior pastor of Statesboro First United Methodist Church. “Similarly, folks in South Georgia continue to seek clarity about what is next for our denomination. I know there are lots of topics that need attention, but our request is that the Protocol gets first consideration, if possible.”

The South Georgia Annual Conference General and Jurisdictional Delegation has released a statement unanimously affirming the work done on the “Protocol of Grace & Reconciliation Through Separation.” It also recommended the Protocol be the first legislative item considered by General Conference 2020.

The statement reads: “The South Georgia Annual Conference General and Jurisdictional Delegation supports the Protocol of Reconciliation & Grace Through Separation as a way to move forward into new expressions of Methodist ministry and mission. We earnestly believe that the Protocol provides the best option to end the impasse in our denomination, is in the best interests of our Annual Conference and strengthens our witness in our communities and the world.

Your delegation wants to hear from you!

Please reach out to us if you have any comments, concerns or questions. Click on the name of the individual on the above list for their email address.

Legislative Committees
Serving on behalf of South Georgia in legislative committees will be: 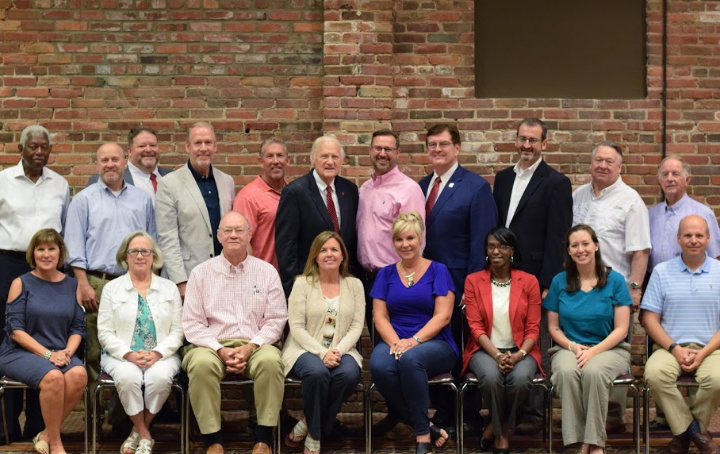 In all, four clergy and four laity were elected to attend General Conference, the highest legislative body of the denomination, which will meet May 5-15, 2020, in Minneapolis, Minn.

While the denomination’s future and human sexuality will dominate conversations at the 2020 General Conference session, Rev. Cowart says there’s more to discuss than just those two issues.

But, he said, more work needs to be done in regards to declining membership.

“Evangelism, discipleship, and turning the numbers around are all things that have to be addressed.”

Hatcher, who has served as a delegate in every General and Jurisdictional Conference since 1988, said that he’s honored and humbled that the laity of South Georgia are trusting him in this role. He’s ready for the denomination to move forward past the issues that have divided it for decades.

“My hope is that I will be able to help the Church continue on the path established in St. Louis,” he said. We’ve too long fought over the issue of human sexuality and the interpretation of scripture. So when we, as the church, can get to the conclusion we can serve God’s kingdom better going our separate ways, each interpreting the scripture as we are led, all of us will be in a better place. We should bless each other and wish one another the best instead of fighting and being adversaries.”

Rev. Cowart said that, while there will be challenges, he is grateful to serve alongside the other delegates.

“This is an awesome task to help our Church navigate these turbulent waters.”