To the clergy and laity of South Georgia: As you know by now, my passion is sharing Jesus, seeing the overlooked, joining God in transforming lives, and changing the world one ...
Columnists
Print this Edition
About Us Birthdays Obituaries Scripture Readings 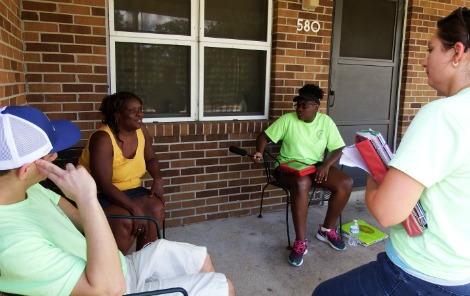 In the Internet age with smart phones and social media, we’re more connected now than ever. So why do we feel so disconnected?

Since 2012, Centenary United Methodist Church has worked in its Macon neighborhood to connect neighbors to one another and to promote a greater sense of community through its Roving Listener program.

A group of youth and adults who listens and asks questions, Roving Listeners seek to learn people’s gifts, hear what people want to see happen in their communities, and give them a voice.

“In the United States in 2017, we have the ability to live in a culture of isolation,” said Rev. Stacey Harwell-Dye, who served as Centenary UMC’s minister of community building before relocating to the Savannah area. “We could choose to go all day without talking to any of our neighbors.”

Four Roving Listeners – two youth and two adults – are grouped together for the summer and, through the program’s guided questions and their conversations, learn about the community, its needs, and the residents.

Centenary UMC and the Roving Listeners have partnered with the Georgia Council on Developmental Disabilities, and the Listeners include those with and without developmental disabilities.

Laura Sugg is a Centenary UMC member, a teacher, and, in the summer, a Roving Listener. Several of her students have participated in the program, and Sugg sees its benefit to them and the community.

“(It) connects people who might not otherwise be connected,” she said. “It also fosters connections with people who have learning disabilities.”

The program has benefitted the students as well as the community, she said, noting that two of her students and Roving Listening team members are autistic. Participating in the Roving Listeners program has given them opportunities to practice social skills and has grown their confidence and ability to form relationships with others.

The Roving Listeners don’t just listen, leave, and forget. After their sessions, Listeners take the information from their interviews, compile it, and make connections among residents based on needs, skills, interests, and similarities.

It gives people a voice, a platform, a direction, Sugg said, and helps them understand that everyone has a gift.

For example, one man wanted his neighborhood cleaned up, and during the interview talked about his passions, gifts, and what he wants for his community. He’s now organizing a community clean-up day.

She took the idea to Macon and, in its five years, the program has expanded beyond its original neighborhood to include broader stretches of the city, including College Hill and East Macon. She also introduced the concept to church leaders at a General Board of Global Ministries’ (GBGM) training event, through their Center for Mission Innovation (CMI).

While many Roving Listeners are members or regular attenders of Centenary UMC, the program is not a tool for evangelism, Rev. Harwell-Dye said. It’s meant to build the community, to help foster a sense of belonging and pride, and to give people a voice.

“Centenary cares about this community,” Rev. Harwell-Dye said. “They are about the city. Isaiah 58 talks about being repairers of the breach. Centenary feels like they are there to repair … and this is one way to do that. Centenary is committed to this neighborhood and is committed to seeing it thrive.”

A few neighbors were initially apprehensive about the project, not understanding that the Listeners were there just to have a conversation, but once they understood they were more than willing to invite them onto their porch or into their home.

“I think, especially in our modern world, we are so connected but disconnected, and this takes it back to the roots of understanding how neighborhoods used to be when people knew each other and worked together,” Sugg said. “The Roving Listeners encourages this again, and I think that’s beneficial for all communities.”