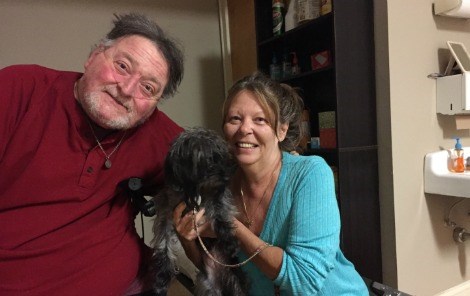 At one point during their evacuation from deadly Hurricane Matthew, Jill and Bill Todd thought they were going to have to spend a night in a 24-hour McDonald’s.

The couple, along with Max, their small mix-breed dog, evacuated their St. Augustine, Fla. home at noon on Thursday, Oct. 6. After finding that their hotel reservation had been given away, they drove northwest. Their search for another place to stay took 10 hours.

Without smartphones, they stopped to inquire about hotel vacancies at 14 exits along Interstate 75. Exhausted, anxious, and overwhelmed, they were desperate. Dependent upon portable oxygen therapy, Bill must have electricity to survive, and that’s why they found themselves at McDonald’s, contemplating spending the night there so Bill could plug in his oxygen.

But at one of the sold-out hotels at which they inquired about a room, a kind front-desk employee told the Todds about a nearby temporary shelter that accepted pets. It wasn’t far from where they were, so they decided to keep going and check it out.

When they finally arrived at Valdosta First United Methodist Church’s temporary Hurricane Matthew shelter at 10 p.m. they were greeted warmly and shown to a large storage-turned-sleeping-room.

The hospitality and generosity they encountered was unlike any they have ever experienced, they said.

So impacted by the experience and the kindness they were shown, the Todds plan to give back to the congregation that showed them so much love in their time of need.

“I’m going to tithe to this church each week,” said Bill Todd. “I don’t have any place I tithe to, but this is fantastic. I’ve really felt the Christian spirit. They’ve made us feel important.”

The Todds were just two of the 160 Hurricane Matthew evacuees Valdosta First UMC took in Oct. 6 through Oct. 9. What set it apart from other area shelters is that pets were able to join their families in the shelter.

“Pets are like family to so many people, so we said we would open and take them in,” said Rev. Shannon Patterson, associate pastor at Valdosta First UMC.

Rev. Patterson was a young youth pastor at the church in September 1999 when Hurricane Floyd was predicted to hit Georgia and mandatory evacuations of coastal counties were ordered. The church opened as a shelter then, so she knew the ins and outs of how to run one.

Valdosta First UMC was, to Rev. Patterson’s knowledge, the only shelter in town accepting pets – Red Cross shelters aren’t able to, per their policies – so they knew they’d fill quickly.

Breton Frazier and her cat, Depot, live four miles from the Atlantic Ocean and three streets from the Intracoastal Waterway in St. Augustine, Fla. Frazier wanted to get at least 100 miles inland before Hurricane Matthew hit, but by the time she evacuated Wednesday all hotels in South Georgia were sold out.

She drove to Valdosta anyway, trusting that God would provide.

“I knew that I needed to head west and north,” she said. “My friends … told me I was crazy to head to Valdosta since I knew there was no place for me to stay here. But the Lord provided brilliantly, like He always does.”

Before arriving at Valdosta First UMC, Frazier’s expectation of a shelter was that she’d be sleeping in one large room with barking dogs and 200 other people.

Instead she was greeted and shown to Rev. Patterson’s private office, which sits across from a women’s restroom and has a comfortable couch, where Frazier slept.

“I hadn’t been here 10 minutes when Shannon offered her office. What an overwhelming thing for someone to do for someone you just met,” she said. “Everybody has been incredibly welcoming. Really generous from the heart. It’s been unbelievable.”

Countless volunteers served around the clock, feeding and taking care of evacuees and their pets, congregants and local businesses donated food and supplies, and even more cleaned and reset the church to prepare for worship.

Serving. Volunteering. Feeding the hungry. Loving God, loving others. Being the church.

“We have the facility, we have the space. To not open our doors would just be ridiculous; it would be a shame,” Rev. Patterson said. “This is what we’re supposed to be. If all we’re doing is opening our doors for an hour on Sunday then we are not really the church.”