This church was organized in 1841, in a Meeting House at the corner of Jackson and Residence Streets. Rev. George W. Farabee was the first pastor with Albany listed in the Fort Gaines District of the Georgia Conference. When the Florida Conference was created in 1844, Albany was in the part of Georgia that was needed to make a new conference. In 1845, Albany was in the Quincy District. By 1866, Florida had grown large enough to support its own conference, and the lower part of Georgia was returned to the Georgia Conference and the subsequent division into the North and South Georgia Conferences. In 1844, in the 100 block of Washington Street, a frame building was erected and used until a new church was built on Flint Ave. in 1854. This church was used until 1901 when a new brick church was erected on the corner of Flint Ave. and Jackson Street In 1960, it was torn down to build the current fellowship hall and chapel. The present sanctuary is a masonry construction of modified Gothic design. In 1966-1967, new stained glass windows, designed by H. L. Wise Associates, were given in honor of living members and as memorials. Construction on this building began on November 13, 1950. This church has hosted the annual session of the South Georgia Conference in 1868, 1882, 1917, 1932, 1954, 1964, and 1978. In missionary effort, this church has helped with the beginning of these churches: Grace now Palmyra, Trinity, and Asbury, now Trinity, Avalon, Morningside, Porterfield, and Christ.
In 1878, the church formed the Parsonage Aid Society which is now the United Methodist Women. In 1982, it began a television ministry. April 1991 marked the 150th Anniversary of the church which was celebrated with year-long activities including concerts, special membership recognition, and the planting of the sesquicentennial tree.  In 2002, the church had 22 youth going through confirmation. The church has been involved in mission work through Disaster Relief for flood victims, drives for UMCOR, medical mission trips to India for over 20 years, and other U.S. mission trip destinations. 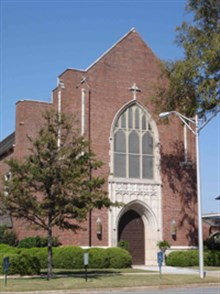