The present Irwinville UMC is a unification of Irwinville Methodist church and the former Mystic Methodist Church.

The Mystic Methodist Church had its origins in a blacksmith shop two miles northwest of Mystic. The following families met and organized a community Sunday school: Mr. M. G. Hogan, Mrs. Z. J. Bussell, and a Conner family. Later, the group moved to a small log building nearby on the farm of Mr. I. J. Bussell. Both Methodists and Baptists held joint services in the log building until they could build separate churches. Several years later, Mr. M. G. Hogan donated a piece of land on his farm for a Methodist church and the building was called Bethel. It was the first organized Methodist church in the area. The first pastor was Rev. John C. Flanders and church services were held once a month. In the early 1900s, the church was moved closer to the people for convenience. A plot of land was purchased from Mr. Z. J. Bussell and his brother, Mr. I. J. Bussell. A church was built and named Bethel but, later, the name was changed to Mystic. A Sunday school annex, formerly the Old George's Chapel Methodist Episcopal Church, was added in 1935, under the pastorate of Brother S. A. Douthit. A new roof was added, the building was painted inside and out and pews were installed. During the 1950s, due to declining membership in the Mystic Methodist Church, it merged with Irwinville Methodist Church.

The Irwinville Mission began in January 1891, with James O. Branch as the presiding elder of the Valdosta District. In 1902, James B. Clements sold a tract of land to the trustees and a building was built by Mrs. Ora Baker Clements. Some of the families who made up the membership of the early church were J. E. Jones, Z. Bass, Allen Worrill, John Clements, J. W. Weaver and A. M. Wilcox. During 1937-1938, under Brother L. D. McConnell's pastor, plans were made for a new church building. The land was exchanged for another, lumber was donated from the old County Courthouse, and the structure was completed in 1939. The church was remodeled 25 years later under the leadership of Brother Albert Trulock.

In July 1965, the two churches merged and used Irwinville UMC as the sanctuary. Mystic's building became the educational building for St. Peter's Fitzgerald. A Sunday school annex/social hall was added in 1967. 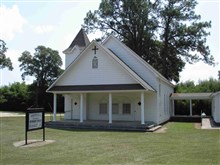