This church is first listed in the South Georgia Minutes in 1885, when Rev. James M. Foster was listed as supply pastor to eight churches, including Statenville.  The 1886 Conference Minutes reveal that Rev. Mitchum H. Galloway received 25 members into the church at Statenville.  In 1909, in the Blackshear Times, the town of Statenville was mentioned as having two churches, Methodist and Baptist, and that the Methodist congregation was well pleased with the pastor, Rev. R. E. Bailey.  It is not know where the first church building was located but a wooden building was constructed around 1912-1915, and that means there was some kind of structure used in the year from 1886-1912.  Land was donated by Mr. Samuel Staten and the present day church still stands on this property.  Mr. Allie Garbutt is credited with the construction of the building by his Garbutt Mill workers.  The interior of the church was one large room with wooden benches.  The plain glass windows had cloth shades and a wood-burning heater was on the east side of the church. Sunday school classes were held in the same room.

Under Rev. C. A. Abbott's pastorate in the mid 1940's, a decision was made to build a new, larger church building.  The completed building had in addition to the main chapel area, two Sunday school rooms at the front on each side of the vestibule.  Two more Sunday school rooms, a small hall and restrooms were added to the north side.  In May, 1967, the fellowship hall was dedicated to Clyde Prescott Smith and, in 1973, brown stained glass windows were installed and a choir area added.  On June 27, 1982, the memorial cross plaque was presented in memory of her mother, Maude Prescott, by Winnie Prescott.  Pictorial stained glass windows replaced the brown, stained glass windows in 1995.  The new fellowship hall was completed in 2000, and the old fellowship hall was made into three classrooms with a hall connecting to the new fellowship hall.  The parking lot was paved and playground equipment was installed by the young adults in 2001. 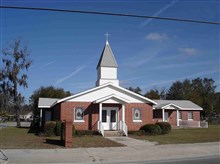