The Trader's Hill community, a former Indian trading post which was called Fort Alert, used the Methodist Church bell to warn of impending attacks from both Native Americans and the Union Army during the Civil War. Quarterly conference records show that Trader’s Hill Charge was in the Brunswick District in 1891. William J. Meadows, a member of the church, served as local preacher. The sanctuary was an unpainted, wooden, shingle-roofed building with two rows of board benches, a pump organ, glass windows, and 6 kerosene wall lamps. There was also a bell and rope in the front of the church. There was no way to heat the church during the cold months. New members were baptized on the banks of the St. Mary's River.

This building was torn down in the 1930s, and a new, smaller one was built several blocks away from the original site. The bell and organ from the first church were put into the second sanctuary. The church was built on a one-half acre of land deeded from the Georgia-Florida Investment Company and dedicated in May 1933. Membership in the church gradually decreased, the building fell into disrepair, the bell and organ were stolen and all that remained was an empty lot. Currently, there is still an open-air Memorial Chapel in which the church conducts weddings and 5th Sunday services with dinner on the grounds. In September 1986, the members of Traders Hill UMC celebrated the completion of an open-air chapel with Rev. Marion Edwards present. It was built on the site of the former wood church building and was used for the fifth Sunday gatherings for the members of the Folkston Circuit. 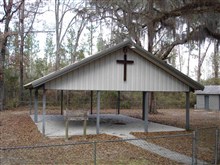