In the beginning of the colony of Georgia, John Wesley, the religious leader of the new colony, visited the Highlanders and stayed two days in January 1737. Methodism came to this area as a campground in 1802, and, by 1835, this church was being served on a circuit. Rev. Thomas Williamson is among the first pastors. The early circuits were Liberty, St. Marys, and Savannah. It has been in Brunswick, Hinesville, and other districts since its start. A wooden building, begun in 1841, was remodeled in 1874. Blown down by a storm in 1883, it was rebuilt in 1884, probably using as much of the yellow pine from the old building as possible. The ladies, having organized into a Ladies' Sewing Society with eight members in 1878, made money for the construction and furnishing of the new building by "piecing quilts." In 1919, the Townsend-Darien Circuit was made up of Darien, Townsend, Reynolds, Barrington, Davis Memorial, and Jones. Rev. J.E. Barnhill was the pastor. In 1940, it was Darien, Crofton Memorial, Midway, Morgans, Mt. Pleasant, and South New Port.

In the early 1940s, the house in Darien was purchased for the parsonage. In 1878, a Foreign Missionary Society was begun which, in 1940, changed to the Woman’s Society Christian Service and, in 1972, became U.M.W. Over the years this group has helped with many church projects, including the sale of cookbooks in 1959.  In 1959, a two-story Education Building, containing an auditorium, pastor office, Sunday school rooms, and the kitchen was built. In 1971, a new parsonage was constructed and dedicated in 1975. In 1997, the church was presented the Methodist Youth Program of the Year Award for the Waycross District. In 2005, a new Assembly Hall, seating one hundred-twenty people, was constructed.  In June 2010, the church began a local mission, Charlie's Place, to help feed those in need. 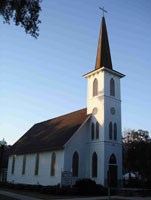