In 1837, when the town of Hinesville was laid out, a plot was reserved for the Methodist Church. This site was adjacent to the courthouse, where Bradwell Park is now. A small frame building was built on the lot reserved for the church and it was there that Methodism in Hinesville began to grow. By 1845, the church had a Sunday school and, by 1890, the Woman's Missionary Society had twenty-five members. In March 1900, a group of Hinesville ladies banded together to form a Ladies Aid Society which made special efforts to raise funds for the church building. In 1901, this group paid for new shingles for the roof, two chandeliers, and six bracket lamps. From 1837 until 1839, the Hinesville Church was a part of the Hinesville Circuit. Under the pastorate of Rev. C. B. Ray, construction of a new church began in 1941. Work was completed in 1942, under Rev. J. W. Patterson, and was dedicated on September 4, 1944, with Bishop Arthur J. Moore delivering the dedicatory sermon. The stained-glass windows were added under Rev. Samuel L. Douthit's pastorate from 1950-1954.

In 1975, the sanctuary was renovated and a new parsonage built. On January 23, 1983, Rev. J. D. Corbitt handed the shovel to Mrs. L. D. Shipley to break ground for the new sanctuary and office facility. Construction was completed and the new sanctuary was first used in June 1985. 1987 saw the celebration of the 150th anniversary with the release of balloons, parades, and homecomings.
There have been many activities since the year 2000. The Thanksgiving Outreach program was extended to the community, a Cub Scout program began, weekly Bible moments were added to the preschool and a church budget was developed. 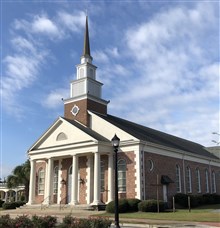