This church is named after the mother of Alfred Smith, the man who built this church. The cemetery is older than the church, having been started by Alfred and Katie Smith at the turn of the last century when they buried their infant son in February 1898. Prior to the church building, meetings were held on the front porch of the Smith's house. Later, a brush arbor was erected near the present site. The church structure was started in 1934 and completed in 1935, with members doing much of the construction. The land and lumber were donated by Alfred Smith, except for one cypress tree used for the roof shingles. The pastor who officiated the first service in the sanctuary was Rev. R. F. Owen. The dedication service took place in May 1936, officiated by Rev. Leland Moore.

This church was first on the Screven Circuit, but in 1948 it was transferred to the Alma Circuit. In 1970, the Alma Circuit was combined with other circuits and Martha Memorial was assigned to the Pierce Circuit. Rev. Robert W. Hendrix was the longest serving pastor having served this church for fourteen years. A front porch, kitchen, restrooms, basement storage, social hall and stained glass windows have been added over the years. The steeple is the latest addition having been completed in December 2004, and dedicated on January 16, 2005. At present, there is an active membership, weekly Sunday worship services, Sunday school and Bible study. Homecoming is observed annually on the second Sunday in May to commemorate the church's first dedication in 1936. 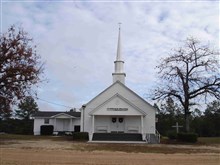