The story of the Methodist Church in St. Mary's began with the coming of George Clark as a missionary in 1799. At the Annual Conference in Charleston in 1799, John Garvin was appointed by Bishop Asbury to St. Mary's. After a year's work, he reported 14 members. A Union church had been built at this time and was used by every denomination but the Methodists, who met in brush arbors or people's homes. By early 1813, the city gave property and a church was built. The trustees at this time were David G. Jones, Isaac Crews, William Mickler, John Brown, and Abraham Bessent. In the 1830s, Bishop James Osgood Andrews visited St. Mary's and described his visit. "I found a kindly welcome in the home of Sister Bessent, widow of an excellent local preacher who had some time previously gone to his rest." As early as 1848, St. Mary's Methodist Episcopal Church, South helped to establish a church on Cumberland Island, to be served by their pastor. In 1856, the original church was declared to be rotten and another church was built. From 1863-1865, the church was closed by order of the federal authorities and the church records state that "St. Mary's was in possession of the enemy during the war, the church was closed and the flock scattered."

In the autumn of 1909, Rev. John Wesley Simmons, a missionary to California, graduate of Emory, and chaplain in the Confederate army was appointed pastor of St. Mary's. Rev. Simmons fell ill and a young man who felt the call to preach was sent to help with the church. Arthur J. Moore was the young man and he described St. Mary's as "a beautiful cultured town on the Georgia coast." It was during his tenure at St. Mary's that Arthur J. Moore received his license to preach.

In 1952, St. Mary's became a station church. The old parsonage was sold and moved from the church ground. Rev. Billy Key lived in the new parsonage, which was dedicated to Mrs. John R. Bachlott, or Miss Sig, organist for 35 years and financial supporter. A new brick educational building was constructed in 1958, and this was dedicated in 1962, by Bishop John Owen Smith. A new sanctuary was completed by September 1966, and the guest speaker at the dedication was Bishop Arthur J. Moore.

The first women's group, known as the Ladies Sewing Society, was started in 1839. In 1880, the Woman's Foreign Missionary Society was formed. The Wesleyan Service Guild was formed in 1965, and in 1968 it was called the Woman's Society of Christian Service of the UMC. In December 1972, all of these guilds became the United Methodist Women with Mrs. Edris Todd as the first president. 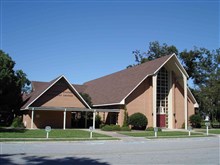