In 1818, John Slade, a missionary from South Carolina, was sent to Early County. It is believed that sometime around 1830, he organized this church and served as its first pastor. The first building was erected on or by November 10, 1869. On July 18, 1927, the ground was broken for the present brick building which was dedicated on April 17, 1928, by Bishop William N. Ainsworth. Mrs. Ainsworth was a member of this church when they were married. An educational building was dedicated on March 4, 1956, by Bishop Arthur J. Moore. The church at one time was a member of the Decatur County Circuit.
As early as 1886, the church had a Woman's Missionary Society and a Juvenile Society. In May 1964, open house for the new parsonage was held. On October 29, 1972, the church, parsonage, and Sunday school building were damaged by a tornado. During 1978-1980, the cemetery attached to the church was incorporated and gained tax-exempt status.  In the fall of 1980, the sesquicentennial was celebrated. 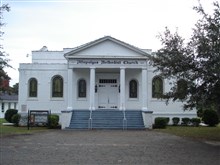