The March 16, 1888, edition of the True Citizen weekly newspaper talked about the community "agitating the idea of building a church at the Cut."  This agitation was the beginning of Green's Cut UMC. During the early months of 1901, construction was underway and the first services were held on March 31, 1901. Mr. Herrington taught the first Sunday school class and Rev. Francis McCullough officiated at the worship services. On November 17, 1901, the church was officially organized by Mr. H. C. Reese, Mr. W. E. Usher, and Mr. L. P. Rogers appointed as trustees. Mr. Reese also acted as steward and Mrs. Annie Rowell was Sunday school superintendent. A deed for the property was recorded on November 24, 1902, by Henry C. and Carrie Bell Syms Reese for the sum of five dollars.

According to newspaper articles and courthouse records, the present sanctuary was built from 1909-1910, with the parsonage built around the same time. On November 18, 1909, H. C. Reese and Carrie Bell Syms Reese deeded an additional acre of land to be used for the parsonage. The True Citizen newspaper noted on February 26, 1910, "The new church building at Green's Cut has been completed and services will be held in it next Sunday". Rev. Theo Pharr was pastor at this time.

In the late 1950s, MYF was organized and, in 1963, the fellowship hall was built. Church services were held twice monthly, the first and third Sundays. In 1987, a trailer was bought and used for Sunday school classrooms. In 1990, the church separated from the charge and became full time. In June 1993, this church became a station church. On September 8, 1996, Rev. Hyatt Smith led a special church Dedication service after the completion of the restoration of the church building. 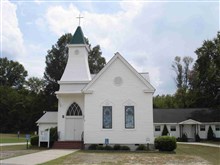