In the fall of 1927, a house belonging to J. B. Lewis was purchased to be used as a church. It was named Nesby Chapel and a few dedicated members, including Sister Eliza Nesby, met for years at this location. The church was moved closer to town and used a site on Sister Eliza Nesby's property. Sister Nesby went into the ministry and purchased land from John Booker for Nesby Chapel. This is where the present church is located. Later, under the leadership of Rev. B. F. Griggs, a wooden structure was built and provided services until the 1970s, when the old building began to deteriorate. Under the pastorate of Rev. George Payne, the old wooden building was torn down and services were held in a parsonage trailer provided by the United Methodist Council on Ministries. Church services were held on the second Sunday of each month at 11:30 am and 5:00 pm. Prayer meetings and Bible studies were held on Tuesday nights at 6:00 pm. Sunday school was held each Sunday morning at 10:00 am.
In the fall of 1979, after approximately five years of hard work and many fundraisers, the members moved into the present sanctuary. In 1989, an additional restroom, stained glass windows, and a pastor's study was added. A new fellowship hall was built and dedicated in honor of Sister Rebecca White. This renovation took place under the leadership of Rev. Marcelle G. Myers, who served the Nahunta circuit for fourteen years. 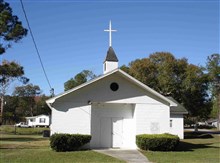