Organized in the late 1800s, this congregation first met in Whiddon School House. In 1901, John R. Gholson deeded one acre of land for the church building which was built of prime lumber. The sills were pure fat "lightered"; the blocks were chipped off rocks at Hutchinson Ferry on the Flint River. This church was sold in 1951 and services were moved to the Recovery School House, which had been built in 1923. This white frame building is still in use.

In 1940, the first Easter Sunrise Service was held at the church. The congregation had to move out in 2001, due to building structure problems, raised the renovation funds, and rededicated the church in February 2002. During the early 2000s, members of the Lydia Gathering, the church women's group, toured Vashti and bought Bibles for mentally challenged patients at Florida State Hospital. 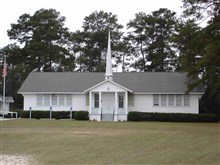