When the original 50 acres were laid out for the town of Bainbridge, a parcel of land in the southwest corner was reserved for the Methodists. First United Methodist Church of Bainbridge began in 1823 and was led by Dr. David L. White of Quincy, Florida. In 1830, the simple title to the property was vested in the Methodist Episcopal Church. The first building, a log house, was erected to the west of and adjacent to the present church site. During this time, Bainbridge was included in the South Carolina Conference but, in 1852, it was transferred to the Florida Conference as a mission church.

In 1854, a new and larger church was built with Rev. F. A. Branch as the pastor. By the early 1890s, this building had become inadequate and a new, brick building was erected and dedicated on November 9, 1899. At that time, Rev. W. N. Ainsworth was in his fourth year as pastor and he would go on to become Bishop of Georgia. This building was destroyed by fire in 1906, which resulted in the construction of the current building that was dedicated in 1911, the same year Bainbridge joined the South Georgia Conference.

There have been several additions to the original building. In 1957, the Children's Education building, known as the Sharp Building, was named to honor a beloved pastor, John Sharp, who served Bainbridge FUMC from 1953-1954. In 2009, this addition went through an exciting transformation as "Glad town" came to life as a place for children to grow and learn in Christ. The church parsonage was constructed in 1964, on property donated by Mr. Charles Kirbo and is still in use. A generous contribution from the J.O. Smith family later initiated construction of a multipurpose building which was completed in April 1976. It is used for the contemporary worship service on Sunday mornings and has additional rooms for various classes and youth group meetings. The Adult Sunday School building, completed in 1999, has numerous classrooms and a library where adults and youth meet for Sunday school and weekly Bible studies. In April 2007, the Oscar Jackson building and property was secured which is currently being used for the Food Bank serving 50 families each week. The Donald Smith Scout Building is home to Boy Scout Troop 503 which has been sponsored by the church since 1949 with over 70 Eagle Scouts coming from this troop.

Bainbridge FUMC boasts an outstanding music ministry which includes a chancel choir, handbell choir, youth and children's choir. There is a Mother's Morning Out program which is a daycare and preschool for ages 12 months to 3 years. The UMW and UMM are still very active. There have been 68 pastors and 14 associate pastors during the tenure of the church with 6 former members going into the ministry. These people include Charles Jackson, Jr.; Mercer B. Ingram; Jerry M. Woodbery; Dr. Hugh Davis; Eugene C. Cochran;  and Marcia Jane Cochran - the first female ordained as an Elder in the South Georgia Conference. 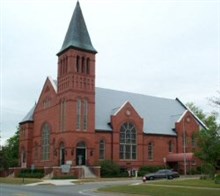