The Iron City Methodist Church was organized on February 14, 1897, in the office of J. L. Dickenson's store. The trustees were J. L. Dickenson, W. D. Acker, and David A. C. Funderburk. Land to build the church was purchased from the Iron City Board of School Trustees on October 13, 1897. Sunday school and church services were held in the Iron City school building until the church structure was completed in 1898. The first Woman's Missionary Society was organized in 1899, by Mrs. J. L. Dickenson. It was discontinued and reorganized in October 1928. The sanctuary was remodeled in 1916, with new pews installed, pulpit and choir section remodeled, carpet laid, and sanctuary repainted. Both in 1933 and 1945, Sunday school rooms were added to the back of the church due to increased membership. Gas heat was installed in 1950-1951, along with a new roof, new steeple, and painting inside and out. The gas heaters were removed in August 2004. Also in 1951, an MYF was formed by Emmett Roberts with 10 members. In the early 1970s, the front porch was added, the pews were refinished, and restrooms were installed. In 1991, major repairs were accomplished with the installation of vinyl siding, insulation, new carpet, reroofing, and painting. The centennial celebration was held on April 5, 1998. On March 18, 2009, Rhonda and Jud Greene presented the new columns for the entrance to the church. 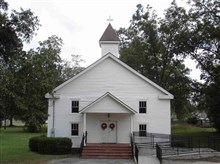