The first building used by the Methodist Church in Jakin, Georgia, was built by Duke and Bivings, early residents who operated a sawmill, about 1894. At this point, the church is not yet a member of the South Georgia Conference and so preachers would be brought from Dothan, Alabama for periodic meetings. Rev. Streeter and Rev. Johnson were two of the first pastors. Sunday school was held every Sunday afternoon with the community attending. The first time Jakin is mentioned in the South Georgia Minutes is 1898 when it is noted that Jakin and Cedar Springs were listed with Rev. I. P. Tyson as pastor and Rev. J. O Branch as presiding elder. In the 1899 Minutes, it was noted that this church has one hundred seven members. During this period, a new parsonage was built by the Flowers family and Flowers Lumber Company. The Flowers family also provided a parsonage.

In the 1950s, noise became a problem and the decision was made to build a new church structure on a lot on the north end of Main Street. Construction began in 1958 and was completed in 1959. In 1965-1966, an annex was constructed on the rear of the church building consisting of a dining hall, kitchen, and two restrooms on the ground floor and four Sunday school classrooms on the second floor. Central heat and air conditioning were installed in the spring of 1970. 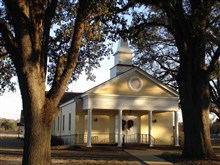