The first building was constructed during the spring of 1856 on an acre of land given by Mr. John H. Dickenson. The church was a large, board building three and one-half miles from the present site. The second sanctuary was on land given by E. T. C. Dickenson and F. B. Williams on October 29, 1910. In 1946, the present pastor started having services in his home and in February 1947, Mr. I. M. Lynn gave the present lot on which the church now stands. There were 23 charter members and the labor needed to build the new church was done by the members themselves.

The church purchased an acre of land in 1967 from Tomas Bevel and this is where the present cemetery is located. In 1968, it was discovered that the sanctuary had a termite problem. Construction began and services continued in Mr. and Mrs. Rufus Thompson's house. In late October 1968, the church was consecrated with Rev. Clyde Howard preaching the sermon. 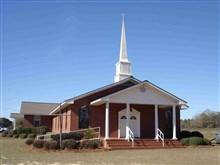