This church was organized in 1876, with twelve members under the leadership of Rev. Templeton. A building was erected on the property which adjoined the Dixie cemetery and was given by Jacob Moody, Jr. It was a frame, with a steeple, a bell, and circular steps. When the second larger building was erected in 1891-1892, this church became home for the Baptists. The new church was also frame and was built on a lot given by Mrs. S.E. Winter and adjoining her property. In the fall of 1925, this building was destroyed by fire. The Baptists invited the Methodists to worship in their former building during rebuilding. The present structure was erected in 1927-1928; a fellowship hall was added some years later. In 1964 Dixie Methodist and Pidcock Methodist merged.

Pidcock Methodist was formed in 1909 as a result of a tent meeting by Rev. F. A. Ratcliffe. It was in the Dixie Circuit. The parsonage was destroyed by fire in 1925. The church was placed in the Boston Circuit for two years and then moved to the Barwick Circuit until 1945. It was then placed back in the Boston Circuit. 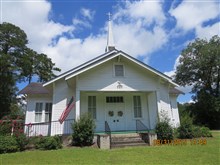