In 1850, Friendship Methodist Church and cemetery were founded on land given by James Jackson Harris. The church, a small log structure, was built by James Jackson Harris and Stephen Pitts. James C. Stafford served as a local pastor. In 1870, a larger log church was built on the same site to accommodate the growing membership. In 1891, Friendship moved to its current site in Donalsonville on land given by John E. Donalson and, with the help of the mission board, a frame building was erected. In 1922, Rev. Albert Trulock came to Friendship as a pastor and began a drive for a new church building. The cornerstone was laid in 1923, by Mollie Harris King, daughter of James Jackson Harris. Under the leadership of L.C. Harvard in 1948, Friendship fostered the establishment of Trinity Church and Reynolds Chapel in Seminole County. With the donation of a Hammond organ by Mr. and Mrs. Wurst in the same year, Mrs. Y.L. Roberts and Marion Roberts started developing the choir. Joanne P. Drake organized the choir into the fine chancel choir it is today. A new parsonage was built and dedicated in 1950, under the pastorate of L.E. Pierce, and a granite boulder was put in the Friendship cemetery marking the place of the old log church in honor of the centennial.

During the pastorate of Henry Erwin, a two-story education building was constructed in 1961. In 1971, the sanctuary was renovated and the Claude Rickman Chapel was dedicated. In 2001, the sanctuary underwent major renovations including an enlarged choir and handicap accommodations. The Alday property was also purchased and later renovated to house youth directors. Kirk Loyless came to Friendship in June 2002, and under his leadership, the Wurst property was purchased and utilized as church staff offices, youth classrooms, and a game room.
In 1976, Friendship was the Thomasville District Church of the Year under the pastorate of Rev. George Herndon and again in 1985, under the pastorate of Albert Joiner. Several members of Friendship have entered into the ministry including Buford Fulford in 1952, Graton Helms in 1965, Marshall Singletary and Ted Marsh in 1982, and John Pierce Drake in 1995. Over the past ten years, our church has sponsored a pumpkin patch, established a food bank, started a backpack program to feed elementary school children during the weekends, and opened a second-hand store which funds the food bank and backpack program. We continue to have a healthy church with Sunday morning classes and worship and Wednesday evening Bible classes and choir practices. 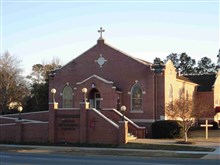