In the mid-1850s, some families moved from South Carolina to the newly created Calhoun County. The Methodists and Presbyterians built a church at Dickey which was later moved across the creek and called Philadelphia. In 1902, when the community of Edison was incorporated, the Methodists built a new church and called it Friendship because other denominations also used it. The pastor at that time was Rev. N. H. William. A new church was erected in 1905 but was destroyed by fire in 1926. A new brick church was built after the fire and is still in use today. An education/social building was built in 1969.

Edison United Methodist Church is on a charge with two other churches as of 2017, Arlington UMC and Vincent UMC. The charge is named Arlington Charge and was formed in 2014. Edison’s previous charge was Edison UMC, Vincent UMC, Morgan UMC, and Bluffton UMC. The Morgan Church closed in December 1998 and has since been used by the Hispanic community of Vincent. They hold services twice monthly. Bluffton UMC closed in 2013.

Edison UMC has services each Sunday at 11:00 am, with Sunday school at 9:45 am. There is a Prayer Group each Tuesday at 10:00 am in the social hall. Edison provides a devotional service every Tuesday at 3:00 pm at Willowood Assisted Living Facility. Edison holds a fellowship supper on the fourth Thursday of each month at 6:30 pm.

Edison UMC operates a Community Thrift Store, the proceeds from which fund the Food Box Ministry which serves 51 needy families each month. Second Harvest Food Bank is instrumental in our ability to help with our community’s needs. 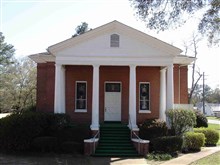