In 1887, the Greenshade Methodist Episcopal Church, South was being discontinued. The congregation was split between a group planning to build in Faceville and others at Fowlstown. The small group that came to Faceville worshipped under the shelter of a turpentine still and in homes until their church was completed in the same area as we worship today. The land was owned by Mr. B. B. Bower and the first deeds were from Mr. Bower to the trustees of Faceville MECS. The congregation also worshipped with the Presbyterian Church. Rev. J. T. Ainsworth was the first pastor at Faceville and the church was placed on the Attapulgus Charge.

The first church building was destroyed by fire in 1904, but the second church was soon completed. It was a wooden structure as well and included a vestibule and two entrance doors. In 1926, this structure was torn down and replaced with the building that now stands. The new church was dedicated in 1927 with Rev. I. R. Kelly as pastor. The building committee was comprised of Mr. J. A. Wells, Mr. M. H. Duke, II, and Mr. D. R. Cooper. Mr. Cooper transported the bricks from Bainbridge in his school bus while members worked the mortar with small hand tools. Soon after, a home nearby was purchased for a parsonage but this was torn down in 1944-1945 and replaced with a newly built house. The pastor and members built the new parsonage themselves.

Under the leadership of Rev. Clayton in 1956, a recreation building with kitchen and dining area was completed by the Young Adult Sunday School class. This was named the Bates-Edwards Youth Building. In 1963, the sanctuary was renovated and, in 1977, there was an even bigger renovation. 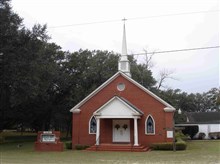