It is unknown when the original Lake Hinton Methodist Church was formed but it was prior to August 31, 1891, which was the date Matthew Alday deeded two acres on which the church, a large, board structure, sat. The church thrived for many years and was reputed to have the best Sunday school in that part of Decatur County, where it was located. However, for reasons unknown, the church ceased to exist around 1915. In 1946, Rev. L. Clyde Harvard, pastor of the Donalsonville Church, was prevailed upon to hold services first in homes and then in the old F.D.R. school auditorium where, on October 6, 1946, Lake Hinton Methodist Church was reorganized with 16 charter members. On January 7, 1948, Mr. Reuben M. Reynolds, Sr. of Decatur County deeded 1 acre of land and gave $1,500 so that a church could be built. The structure was completed in May of the same year and the name was changed to Reynolds Chapel in honor of Mr. Reynolds. On March 6, 1949, the new church was dedicated.
For the next ten years, the church struggled to gain momentum and, finally, in 1960-1963, under the leadership of Rev. Henry Ervin, the church experienced a renewal. In 1979, Reynolds Chapel came under the Trinity-Reynolds Charge after having been with Donalsonville since 1946. The next 20 years saw many improvements and additions to the facilities and membership grew until it was clear a larger sanctuary was needed. On April 29, 2001, groundbreaking for a new sanctuary, which would accommodate two hundred twenty-five worshippers, was held and construction began in July, with the labor performed primarily by the multi-talented men of the church. A service to consecrate the beautiful new sanctuary was held on May 5, 2002. For the next four years, the church worked hard to pay down the debt and on May 6, 2006, a mortgage burning service was held.

Reynolds Chapel is situated in the lake area, draws heavily from retirees who have relocated here to enjoy their retirement. Unfortunately, the church membership has also declined due to health issues, relocation to be closer to family members, and death. Although small in numbers, the active members are involved in various ministries including ministering to the inmates in Seminole County Jail, Pedals of Blessings, Health Ministry and having 6 certified lay speakers. Both the UMW and the UMM are actively supporting various missions. On March 1, 2017, a historical marker was placed and dedicated at the site of the original church which today is within the boundaries of Ray's Lake Park. It is a beautiful site, high on a rise overlooking the lake and has become the Easter sunrise service spot. 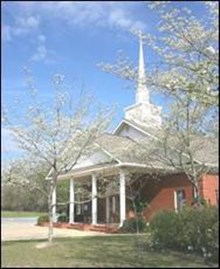