The Methodist Church was consecrated in 1840 and was the earliest house of worship in the town. This was a very plain structure with two entrances at the front, one for men and one for women. The pulpit was in the rear with six steps up to it and the altar on each side with a railing around it. A graveyard was located nearby. The first preacher was Rev. James Woodie and the superintendent was Rev. Hamilton W. Sharpe. During this time, Thomasville FUMC was in the Florida Conference. During the Civil War, the church was used as a hospital and, during this time, services were held in the courthouse. Due to the effects of the Civil War on the church building, the old church building was torn down and a new church built in 1866. This too was a plain, white building, but was more ornate than the first with the addition of a steeple and interior improvements. Also in 1866, Thomasville Methodist Church was moved from the Florida Conference to the South Georgia Conference. Mr. T. C. Mitchell very generously financed a seven-room parsonage for the church. A Sunday school was formed in the 1870s, which was well attended.

Miss Annie Heath, a graduate of the Scarritt Bible Training School, was consecrated a deaconess in Atlanta on April 19, 1903. The same year, the Woman’s Home Missionary Society was given a thirteen-room house and four acres and they established the Vashti Blasingame Home. The home opened its doors to girls aged ten to eighteen whose home conditions were unfortunate and rendered them in need of immediate attention. In 1919, under the leadership of Miss Charlotte Dye, there was an extensive building program which added a large dormitory, dining hall, superintendent's cottage, laundry, and dairy.

In 1916, two wings were added to the church structure which included space for twenty-two more Sunday school classrooms and auditorium space. In 1923, the Wesley Bible Class was formed as a men's bible class and it became one of the largest and most outstanding units in the Sunday school. This class became so well attended, that a new Sunday school chapel had to be built just to house the members. This led to an overall refurbishment for the sanctuary that was completed in time for the 1930 Annual conference. In 1944, Thomasville helped give rise to Dawson Street Methodist Church. This new church persuaded Thomasville to rename itself Thomasville First Methodist Church. Mr. D. Abbott Turner of Columbus donated the funds for the purchase of a new Moeller organ in memory of his father, Mr. John Lovick Turner, in 1949.

In the 1970s, a complete renovation of the sanctuary took place with decorations keeping to the Victorian time period of the construction of the church. After this was complete, a new parsonage was bought in a quieter section of town. The last part of the renovation involved the Sunday school chapel built in 1925 and named the Williams building. 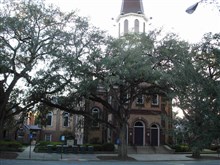