Whigham UMC started in 1869 in Harrell the year after the town was created. The town's name changed to Whigham about 1880. An unidentified Methodist circuit rider conducted a revival meeting in the new schoolhouse located at the corner of First Parallel and McGriff streets. Eight members met in the school, but it was not stable and blew down during a severe storm. W. W. and John Harrell deeded the newly-formed Methodist Church a lot on the north side of Broad Street, which is its present location. D. W. Guilford donated lumber and labor for a two-story wooden structure with the second story being used by the Grangers. In 1875, this building was demolished by a storm and a home was rebuilt by a local Methodist preacher, Mr. Latamore. Rev. N. G. Christopher and his family lived there for decades. William A. Chester led the congregation in building a new church in 1876. The main part of that building is used today as the church sanctuary, although the steeple was removed.

A Sunday school building was constructed in the late 1940s, which included a back door to the church. Prior to this, the pastor, groom, and groomsmen had to climb a ladder into a rear window. In the late 1960s, memorial pews were purchased by church members and with a gift from the Mills family, who was a charter member of the church. A new parsonage was built in 1972 at the corner of Laing and McGriff streets during the pastorate of Rev. Claude Croft. The land was donated by Miss Ruth Kelly and Mrs. Gussie Belcher who lived next door. In 1982, the church was painted, the tin roof was replaced with shingles, and the kitchen was enlarged adding four new restrooms, a large nursery, and exterior stairway. The church purchased the adjoining property owned by DeWitt and Alyce Lee Trulock during the pastorate of Rev. Paul Best. The home was moved and the lot cleared for much-needed parking and a generous playground area for children. The note-burning dedication service took place in April 2000. During the pastorate of Robert and Kate Greene, a state of the art kitchen, renovated bathrooms and renovations to the parsonage were made.

During Marshall Strickland's pastorate, Clara Roberts organized a Youth Choir. The excellent music was enjoyed for several years by both the church and the community. The pastorate of Rev. Mira Barrett and his wife Linda helped bring an influx of young people into the congregation during the 1970s. John Vanstone began preaching on Sunday mornings, providing worship at 11 am each Sunday in the month. During the pastorate of Rev. Charles Whatley, the church presented a memorable drama, "The Living Lord's Supper." Softball teams for both men and women sponsored by the church competed in a county church league and Boy and Girl Scouts at various levels met at the church. Recently, a band, men's breakfast, summer youth missions, and backpack buddies have been added as ministries at Whigham UMC. During the pastorate of Elvin East, Mike Mobley made a decision to enter the ministry. 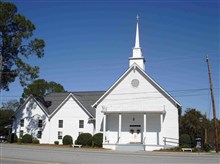