The earliest record of meetings at Mt. Zion were dated in 1842, and the name was then called the Rehoboth Church.  The church was dedicated as Mt. Zion in 1844, and the first record of membership in 1844, listed Benjamin Seckinger, owner of the only continuously flowing spring in this area.  The first church was a small, one-room log cabin between the spring and the cemetery.  The building was later replaced by a larger, wooden frame building northeast of the cemetery and surrounded by 8 to 10 frame tents located on 6 acres deeded, in 1862, by Benjamin Seckinger.  This was recorded on March 8, 1867.  The frame tents were built by members of the church ad each summer a two week revival was held in the area.  At least 6 pastors from Methodist churches in South Georgia would attend and preach.  In 1928, the presiding elder felt the camp meeting should be discontinued for a while and they have never been resumed.

In 1926, Mr. John N. Bray gave an acre of land to the Methodist Episcopal Church and had the current building constructed in memory of his parents, Mr. and Mrs. J. N. Bray, Sr.  Until 1953, Mt. Zion was part of the Lowndes and Echols County Charge.  On July 1, 1952, members of Mt. Zion and Clyattville decided to form the Clyattville-Mt. Zion Charge.  Rev. John McGowan was the pastor and, under his supervision, the three bedroom home was built in Clyattville for the pastor and his family. The Lowndes County Singing Competition began at Mt. Zion on November 10, 1957, and continued until 1980.  Four Sunday school classrooms were added to the back of the church building with lumber donated by Mr. Willie Lineburger.  A social hall was started in 1958, which included a kitchen and dining area but it was not completed until 1968.  In 1981, another room, which served as the dining room, and two bathrooms were added.

Mt. Zion broke from the two-point charge with Clyattville in 1988, under the pastorate of Rev. Gene Sheffield.  The parsonage was started in 1989, and built in memory of Mr. Mitt and Allie Dean by their daughter and son-in-law, Almarine and Joe Brown Albritton.  Mt. Zion became a two-point charge again, from 1997-2002, with the Valdosta State University Center.  In 2002, this church became a single point charge with seminary students as pastors. 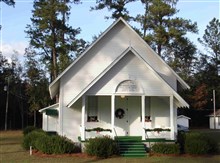