New Covenant UMC is the result of a merger between Epworth UMC and Robert McIntire UMC in 2008.

Epworth was started by members of Trinity Church in 1883, in the home of C. W. Winningham.  It was first named Marvin Mission after Bishop Marvin and was later known as the Seventh Street Methodist Church.  The first building was constructed in 1883, and a second in 1890.  While the second building was being finished, the members met in a room on Whitaker and 35th Street and in the Second Presbyterian Church.  The first pastor was Rev. J. M. Mather  The last sanctuary was finished in 1914, with additions made and remodeling completed in 1961.

Robert McIntire was established in 1947, with the help of Trinity Church and name for a member of Trinity.  However, it had is beginnings in Pierce Chapel which organized in 1913, and was located on W. 56th St.  The last brick building was erected in 1948, and the first pastor was Rev. David A. Duck. 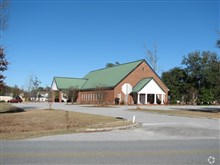