The beginnings of this church go back to the first Methodist Societies in this area, perhaps to meetings before American Methodism was organized in 1784. Tradition says that Lorenzo Dow probably preached at Jones Church around the early 1800s, and this church was moved to Skulls Creek.  This is the third site of this early group of Methodists and perhaps the third name. Paynes's Chapel, named in honor of Rev. Lewis B. Payne, appears in the 1919 Minutes of the Conference as being on the Garfield Circuit, Dublin District, along with Garfield, Union Grove, and Mt. Pleasant. Rev. T.F. Murry was the pastor. When Garfield was organized in 1905, it became the head of a circuit that already had two churches with buildings; one of these probably was Payne's Chapel, though no names are given. In 1921-1924, Payne's Chapel was on the Rocky Ford Circuit in the Savannah District. In 1925, it was placed again with Garfield. In 1940, Canoochee Modo and Pleasant Hill, Garfield and Payne's made up the Garfield Circuit. Rev. Chester Gilbert was the pastor.

In 1947, a chain link fence was installed around the cemetery. A Social Hall was constructed in the spring of 1971. In 1978, the sanctuary was remodeled including new carpet, windows, pulpit, light fixtures, ceiling, and central heat/air. The pews were refinished, the outside of the church bricked, the roof shingled, and a front porch added. Sunday school rooms were constructed. Payne's Chapel was South Georgia Conference Church of the Year for 1978. In 2003-2004, the church pews and other sanctuary furniture were upholstered, the cemetery enlarged, and the Social Hall painted. During this time period, the church held Easter Sunrise service, Bible Study groups, and Homecoming. 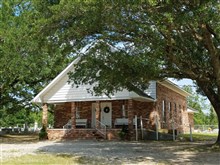