The railroad line had been extended from Macon to Smithville and a community had grown around this. A meeting house was built near the Sumter and Lee county lines, about one mile northwest of the site of Smithville. The Methodist church was by the side of the old Smithville and Dawson Road. In 1878, Dawson and Smithville formed a pastoral charge. When Rev. W. M. Hayes, who was pastor of the church, came to fill his Saturday and Sunday appointments, he was entertained in the homes of the members and food was provided for his horse. This charge was the highest paying charge in the entire Americus District. In 1881, a new charge was created and the church was moved into Smithville at the corner of Whitaker and Back Streets. It had a wide front porch and large columns across the front. Smithville Methodist Episcopal Church, South had two preaching services per month, had 50 members in Sunday school and paid its pastor $145.35 per year. Rev. K. H. McLain was the pastor at this time. In 1891, the Smithville Charge was disbanded and Smithville was assigned to the Bronwood Circuit.

During 1945-1946, under the pastorate of Brother J. D. McCord, plans were laid and executed for the church building that is used presently. The Baptist Church in this area proved to be quite helpful during this construction. Bishop Arthur J. Moore officiated during the dedication in 1946. In June 1965, Smithville was transferred back to the Bronwood Circuit and led by Rev. David Hudson. As of 2015, the church had no youth activities and the UMW met jointly with Bronwood UMC. 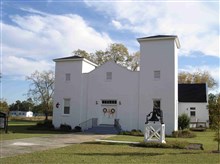