Organized April 1, 1968, in the sanctuary of old First Baptist Church in Perry with ninety-four charter members, this church was a project of the Conference Board of Missions and Church Extension, Rev. Carlton Carruth as director, and Perry Methodist Church.  Sunday school, Woman’s Society Christian Service, and Youth Fellowship groups were started. The first building was consecrated October 1, 1971. The new sanctuary was opened for worship in 1983. Rev. C. Dick Reese was the first pastor. In 1983 this church sponsored the resettlement of a Vietnamese family in Perry.

In 1985, a larger parsonage was purchased. In 1993, the building holding the current offices, parlor, choir room, and several classrooms were completed. On May 18, 2003, the church celebrated its 35th Anniversary. In 2010, a new playground was designed and built by church volunteers for the church Children's Ministry programs. 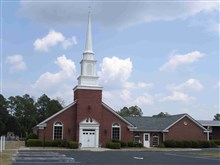