In 1835, Rev. Joseph Edwards, a Methodist circuit rider, organized the first Methodist church in Americus. He held services in a small building on Ashby Street across from the present East View Cemetery. The Trustees of the church bought one acre of land on the high road from Americus to Starksville (now Lee Street) for $30.00 in 1844. A simple frame church was built facing Church Street in 1845. There were approximately 15 families affiliated with the church at this time.
In 1854, Americus was made a station church with Rev. J.R. Littlejohn as the first pastor. In 1856, a spacious, wooden building was erected on Church Street where the present Education Building now stands. The building served the Methodist congregation as the place of worship for the next 50 years. In 1905, a beautiful brick structure facing Lee Street was built under the ministry of Rev. J.P. Wardlaw. This church was completely destroyed by fire on August 5, 1922. Exactly one year later, the cornerstone for the present sanctuary was laid with Bishop W.A. Candler conducting the groundbreaking ceremonies. In September 1925, worship began in the new building that still serves our congregation today. The members of the church pledged and paid the debt of $45,000 in less than 10 years with the last $30,000 collected over a 6 week period from March 3 to April 15, 1934, during the Great Depression.
In 1962, property adjoining the church was purchased from Mrs. Amos Hightower and under the leadership of Rev. Vernard Robertson, a Chapel and new Education building were constructed. On July 4, 1976, a time capsule was buried near the entrance to the Parlor and is to be opened on the church's 200th anniversary in 2035. The mahogany pews were installed and the Educational building was renovated and redecorated under the pastorate of Rev. Bill Dupree. The Education building was reopened for use in September 1983. On Easter Sunday, 1998, an Easter Sunday Offering was received for long-needed capital improvements. Inspired by a challenge gift from Betty and John Pope, $441,660 was received for the needed renovations. The improvements took two years and a Jubilee Celebration was held on April 2, 2000, to rededicate the Sanctuary and Educational Buildings to the glory of God and the ongoing work of His Kingdom. 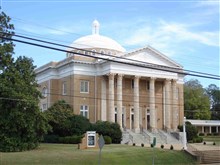