During the pastorate of Rev. J. A. Thomas at First Church, he felt a growing need to start a church in the new residential section of town. He pushed the idea hard and helped to organize the second Methodist Church inside the city limits. It was 1916, and there were one hundred forty-eight charter members. Rev. A.W. Quillian, Jr. was appointed as the pastor, and in the next two years, the church was built. By 1919, a parsonage had been secured and Rev. Silas Johnson, later president of Wesleyan College, was appointed pastor in 1920. The church is named for its location.

In 1949, a new parsonage was purchased. In 1966, a new two-story brick educational building was constructed. Lee Street was named Church of the Year in 1978-1979, for the Americus District. During that time the church did mission work with the Choctaw Indians, volunteered time and resources at Magnolia Manor, formed two new Sunday School classes, participated in special community activities, such as Palm Sunday Walk and Easter Sunrise Serve, and took part in a Missionary Weekend. A new parsonage was built in 1980. Part of the church burned in June 2003. On May 1, 2005, the newly reconstructed Fellowship Hall, Education Facility, and office complex were dedicated. Benevolence UMC merged with Lee Street in November 2008. The Benevolence building was given to the Baptist Association for Hispanic ministries.

The early history of Benevolence Methodist Church is not available, but in 1861 Benevolence was host to the first Quarterly Conference of the Sumter County Circuit which included 11 churches from Tabernacle (Plains' first name) on the west to Pleasant Grove on the east. For many years it was part of the Plains Circuit and in the 1940s this church was closed. In September 1947, Rev. T. E. Davenport, a retired Methodist minister, began services to replace those held by an Episcopal priest. A Sunday school was reorganized and gradually the church rebuilt both its membership and property. An annex was named the Thomas Edwin Davenport Memorial Annex, dedicated May 8, 1955, by Rev. Edward Carruth, the pastor. At this time this church was with Lee Street, Americus. Later again on the Plains Circuit, in 1978, it was placed with the Morningside Church. During the early 1980s, the interior of the sanctuary was redecorated with carpeting, chancel furniture, and pews. 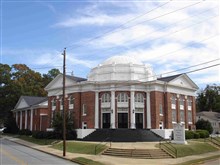