This church was first built in the 1860s, two miles from where it now stands on what was known as the Scarborough place. Rev. Henry Scarborough gave the land to the church which was so named because it stood on the Lee, Marion, and Macon county lines. This building was a wooden structure near the Scarborough home. There are still remains of a cemetery at this site. Trustees of this church were S. R. Halstead, G. W. Tyson, Steve Kent, Rev. W. W. Chenney, and John Hudson.

In 1873, Harrison Holloway gave the land on which the church now stands. The first church built on the land was a wooden building not sealed and tallow candles were used on shelves around the church for light. An organ was added in 1890. The first burial was the daughter of Warren and Lurea McMath in November 1888. Prominent families of this church included the Rooks, McCorkles, Teeles, Goolsbys, Dickersons, McLendons, Granthams, Sisums, Lumpkins, Holloways, and McMaths. In 1892, the structure was changed with two single doors added, one on each side, and the benches being replaced. Warren McMath was the supervisor of the remodeling.  A Sunday school was started in 1911, by John McElheney. Until 1923, Saturday and Sunday service were held at the church and Sara Peters was noted for her regular attendance despite the four-mile walk from her home to the church. Large double doors and cement steps were added in 1931.

A building committee composed of Leo Williams, Earnest Heath, Johnny McMath, and George McLendon was elected in 1954 and a concrete block church was dedicated on June 25, 1955, with Rev. Claude G. Haugabook as pastor. In 1959, a building program was launched. The old Harrison home was torn down and the lumber used to build an annex for the kitchen/dining area. In June 1961, a bus was bought and converted to add more Sunday school space. Also, in 1961, the County Line Visitor was first published by Rev. Benton Taylor to encourage and inspire people. The pews from Pleasant Grove Church were moved to County Line in 1963, and stained glass windows and storm doors were added in 1972. The 1970s also saw the addition of restrooms, storage areas, and closet space with recovered altar cushions and chairs.

In 1977, this church hosted the MYF with eighty-six youth in attendance. The old water pump out back was used and made a noise that scared the youth with its laborious squeak causing them to flee. Luckily, all of the youth were caught. The lectern used for Sunday school purposes was made by Monroe Hanner and donated in 1981. In 1988, a female certified lay speaker, Edwina Kitchens, was found at County Line.

In 2003, County Line chose to go with a part-time minister. Rev. Mark Kinservik preached on the first, third, and fifth Sundays with local speakers on the second and fourth Sundays. Lunch at church was held every third Sunday with a Bible study/prayer meeting every Wednesday night. 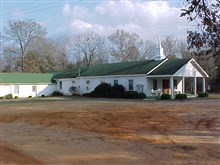