This church, originally called South Lee County Methodist Church, officially launched on March 5, 2006, using the Purpose Driven Church model with a dedicated launch team made up of persons from Porterfield Memorial and Albany First UMC, with Rev. Bryan Gerstel as the founding pastor. Significant financial support was provided by the Albany Board of Missions, the Thomasville District Board of Missions, and the Office of New and Revitalized Congregational Development.

Community interest was piqued with yard signs, reading “What's The Pointe?,” and “Church @ the Zoo!” Other launch successes included purple T-Shirts seen all over the community reading, 'These Are My Church Clothes,' and relevant but controversial teaching topics such as 'Pure Sex,' which was really a series about marriage! Contemporary worship style featuring rockin' music, casual dress, and serious faith, along with refreshments, caused the congregation to outgrow its first home at Chehaw State Park.

The name was changed to The Pointe UMC, Inc. in January 2007 and fifty-five acres of land on the corner of Lover's Lane and Haley Drive was soon purchased to be the future home of the church facility. The congregation continued to be a 'portable church' until the location at 238 Cedric Street, Leesburg became available for lease.
The great recession and new location energized the congregation and average worship participation peaked at five hundred fifty-one people in 2007 and maintained over four hundred forty people through 2010. The first contemporary pastor, Rev. Carl Barnhardt, came to the church in June 2012, after Rev. Dave Hanson served as interim pastor for six weeks. The fifty-five acres of land was sold in fall 2012 and the congregation has since set about living into the mission of meeting people where they are and POINTE-ing them towards HOPE in God as we make disciples of Jesus Christ for the transformation of the world.

The congregation has sponsored scout troops and Overeaters Anonymous groups. The Pointe of Impact ministries began with 'Second Saturday Servants,' where members gather at the worship center and disperse out into the community in partnership with the SOWEGA Council on Aging to do minor home repairs and yard maintenance. This ministry is also leading prayer breakfasts for the Lee County Elementary School, sharing devotionals at the Lee County Senior Center, and creating a recreational field for the area's sports teams.

In spring 2015, a $91,000 renovation of the worship hall was undertaken to create a better worship space. New air conditioning/heat pumps were installed, pendant lighting replaced the pole lamps and the former kitchen was turned into the tech booth. Several pecan trees were removed on the south side of the building, allowing a circle drive to be created and water runoff to be redirected to prevent flooding in the worship hall.

A tradition of giving away the Christmas offering to missions was instituted in 2013, blessing several local and national mission agencies, as well as the congregations, own Generous Giving Fund. In 2016 this offering was dedicated to funding the vision of reaching one thousand souls in the local community with abundant relational, physical, and spiritual health by the end of 2020. Using these funds, new platform lighting as well as a video system were installed in the worship hall to allow the worship services to be live streamed/recorded and placed on the internet to lower the anxiety of persons being invited to worship, as they are now able to see and hear the services before coming as a guest. 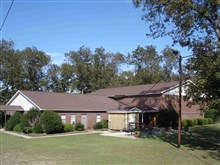