This church was begun at a meeting held in a wooden building in March 1848. First known as Tabernacle, it was located 3 miles north of the present town of Plains. The first building was built in Plains in 1888 as a one-room church with a steeple. In 1865, the members of Tabernacle gave the earliest building to the black members, and by 1888 the white members had transferred to Plains. A Woman's Missionary Society began in 1889. In 1928, a night missionary circle, believed to be the first in the conference, was organized. The 1888 building was replaced by the present brick building in 1910. At each side of the sanctuary and at the rear is a 3 sectioned stained glass window and 2 in the choir. In this sanctuary, Rosalyn Smith and Jimmy Carter, the 39th President of the United States, were married July 7, 1946. Plains has been on several circuits, including Americus and Sumter. In 1919, the Plains Circuit had Plains, Rylander, and Concord with Rev. T. W. Tinley, the pastor. In 1940, it had Plains, Rylander, New Point and Concord with Rev. C. L. Glenn pastor.

In 1950, the sanctuary was renovated inside and out. A brick fellowship hall containing an eating area, a kitchen, a nursery and restrooms were completed in 1957. In 1960, Plains was named Rural Church of the Year for the Americus District. In the late 1970s, the Plains charge had two churches, Plains, and Rylander. During 1979-1980, Plains received the World Parish Citation. During 1981, the church was re-carpeted, sent a mission team to Haiti, and renovated Sunday school rooms. In 1984, Rylander merged with Plains. In 1988, the move to Plains Centennial was celebrated. During the 1980s and 1990s, the church had several yearly programs including July 4th barbecues, Sunday School Attendance Campaigns, Laity Day, Mother's and Father's Day Breakfasts, Senior Prime Time, and White Christmas. In 2000, the church started a Phone Tree Ministry. 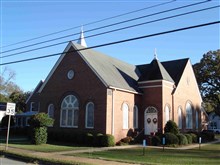