Originally located in the community of Tazewell, this church was begun in 1844. Rev. David N. Burkhalter, the first pastor, furnished the material for the first building. When the church moved to Buena Vista, he gave five acres of land for the cemetery and church grounds. The church has often, through its history, enjoyed dynamic preaching as illustrated by this account from 1854. After a revival held by Rev. Blakely Smith, managers of three saloons joined the church and closed their barrooms. This revival also brought about the building of the new church in 1858. In 1907, the church was made a station church. In 1908, the church building was moved from near the cemetery and placed on the corner lot north of the current parsonage.

In 1924, the church sanctuary was remodeled, including brick veneer, and Sunday school rooms added. Bishop Ainsworth officiated at the dedication. In 1944, the church celebrated its 100th anniversary. In 1944-1945 a new Hammond organ was installed. During the early 1950s, the parsonage and sanctuary were remodeled, including new pulpit furniture, a Methodist Men group started, and a ministry to the prisoners at the county farm was started. During the late 1950s a church library was started, a summer youth ministry begun, and the church received the Town and Country award. In the early 1960s a Young Adult Class, an Older Adult Fellowship, a Kingdom Builders Club, and Friday afternoon Bible Study for youth were started. The present parsonage was completed in 1967. In the late 1960s, the church installed central air-conditioning and started Movie Nights. In 1970, the Woman’s Society of Christian Service formed a new circle for young women, a coffee house forum for college students was started, and renovations, including new carpet, were completed on the sanctuary. In 2001, the church started an official Hispanic ministry after offering English classes informally for several years. In 2004, church members packed and wrapped 178 shoeboxes for the shoebox ministry. 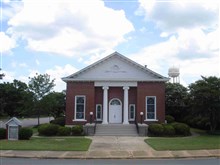