This church was founded sometime in the 1840s, in the Spring Hill schoolhouse. It was called Spring Hill Church and was organized by two local preachers, Homer Mulky and Jimmie Ball. Sometime after its organization, it joined the old Georgia Conference and a circuit rider was sent to serve the church giving it a weekday service once a month. This group met with the Weston Camp meeting until it was dissolved. Then, Mr. Mastin Leverett gave a campground, which operated until some years after the Confederacy, but it was dissolved when the movement to dissolve the campgrounds became prevalent. The Spring Hill Church was moved to its present site and named Mt. Olive Methodist Church on October 3, 1871. The beams in the roof of the present church were the joists in the Old Spring Hill Church. The present building was completed in 1898. Two acres of land for Methodist worship services and Sunday school purposes were deeded by J. L. Bolton to the Trustees: J. L. Bolton, Samuel Willerford, T. J. Daniel, Elizer Bell and Peter W. Reddick.

At one time the congregation, not willing to lose their church, withstood the threat to remove the furnishings and by this action was expelled from the Conference. For a time, the Rev. John West of Cuthbert, a retired preacher filled the pulpit. After some time, the matter was straightened out and Mt. Olive was taken back into the Conference and a preacher was sent to serve the church. The Ladies Aid Society was organized in 1947, by Miss Clara Belle Edwards and the Men's Club was organized in 1953, by Rev. Harry Smith.

Some of the recent projects of the church include painting the inside and outside, installing Venetian blinds, a new communion rail, the remodeling of the front of the church, underpinning the church with cement blocks, new hardwood floors, new pews and an outdoor grill. 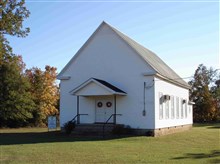