Before the Methodists formally organized a church here, they built a brush arbor for services at Bald Hill Campground. Early records indicate that this arbor, about a mile west of Cusseta, was in use prior to 1851. Somewhat later, Duncan H. Burts gave an acre of land for a house of worship, and the building erected on this lot was used until a larger building was required in 1897. This second church was struck by lightning and burned in the early summer of 1944. After some controversy, the congregation decided to rebuild on a different lot and the Lee Harp house and lot were purchased as a site and the present structure built. While rebuilding, the congregation held services in the Baptist Church and met jointly with them for Sunday school. Until 1891, the church had been led by a layman, Colonel E.G. Raiford, but that year Rev. R.L. Allison became the pastor. The present building has had an annex added, as well as an organ, a stained-glass window, and other improvements since 1944.

In 1983, the church service time was changed in order to start four Sunday school classes. The UMW, an Acolyte Program, and a Men's Breakfast Club were also organized in 1984. In 1985, Cusseta was Charge of the Year. 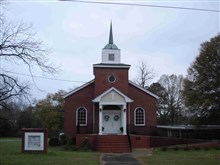