In 1891, the Midland Methodist Church was organized under the leadership of Rev. I. T. Griffith. Services were conducted in the one room Midland school which was located on the same land that was used for the camp meetings. A. I. Jenkins was the one and the only steward at this time. A one-room frame building with a large porch across the front was built with Bishop Joseph S. Key presiding. It was on the Cataula Circuit and then served with Rose Hill. In 1902, Midland served with East Highland and Rev. J. A. Smith was the pastor. The Woman's Society began in the early 1900s, and the Midland Circuit was formed in 1902 when Rev. J. E. Ellis was the pastor. The parsonage was built in 1905 under Rev. A. A. Davis's leadership. Rev. Davis did much of the labor himself and was the first to reside in the parsonage.

In 1919, the church was brick veneered and the front porch was enclosed and divided into three classrooms. Two additional rooms were added to the back of the church and a classroom and pastor's study was added, as well. A vestibule, double doors, and stained glass windows were installed. The renovation was completed in 1926 and the cornerstone was laid by the trustees. In the late 1940s, a new roof was installed and an adequate heating system added. New carpet was also laid and a new ceiling built. In May 1957, an educational building was added under the pastorate of Rev. A. B. Leonard, Jr. During Rev. Hughes’ leadership, a new brick parsonage was built in 1966. In 1981, the sanctuary was enlarged by removing the partitions and folding doors of the classrooms at the rear, new carpet installed, and the sanctuary painted. A playground for the children was added in 1989 and an outside water fountain added. The Centennial celebration was held on June 16, 1991, and Bishop Richard C. Looney was present. 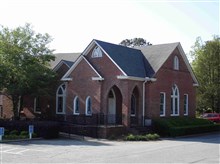