On the third Sunday in February 1892, the first service of worship was conducted in a new church "built on faith and by pledges." Rev. George Culpepper was the pastor. The land had been donated by Mr. J.L. Parrott. This church was the result of a tent meeting held by three preachers, Rev. John B. McGhee, Presiding Elder of the Americus District, Rev. E.M. Whiting, pastor of Dawson Methodist Church, and Rev. John West, a local preacher living in Cuthbert. The August 1891, tent meeting saw the organization of the Parrott Methodist Church with thirty "earnest workers." In 1919, Parrott Circuit had the following churches: Rural Hill, Preston, Mt. Olivet, Enterprise, Parrott and Pierce Chapel with Rev. J.E. Summer as pastor.

In May 1901, the debt-free church was dedicated. In 1905, the parsonage was completed. In 1955, pews, a piano and a pulpit set were installed and the aisle was carpeted. The Annex, containing Sunday school rooms and a social hall, was built in 1960. Stained-glass windows were installed in the sanctuary in 1984. In 2000, Parrott became part of the Parrott/Preston Charge. The sanctuary was renovated in 2009 with a new roof, carpet, and the addition of a handicap ramp. 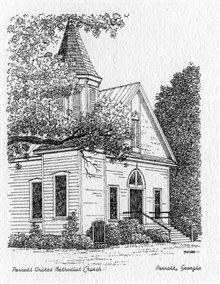