When the first Methodist congregation met in Shellman in 1880, it was in the Masonic Lodge building, lower floor, with Rev. Howard Key officiating. All seventeen members were received by certificates, most of them having attended the New Prospect and Brooksville Methodist Churches. A church building was built near the Masonic Lodge in 1889 and dedicated to Rev. J. D. Anthony. Under the pastorate of Rev. T. W. Danley in 1911, the church became a station. A new sanctuary was built in 1916, under the leadership of Rev. Leroy A. Brown. The first sermon in the new church was preached by Dr. Charles R. Jenkins and Bishop Ainsworth dedication the church in May 1918. Renovations of the church were completed in 1946-1947, with the interior being painted, new carpet laid and a new organ was bought in 1949, while Bishop Arthur J. Moore was present to preach.

The school annex was built in 1958, having been designed by Rev. Frank Gilmore. The parsonage, once located on Phelps Street, was moved to a lot on Pearl Street deeded by Mrs. John M. Bell where a new one was built. A church library was created by a donation made by the C. D. Crittenden family. A grand piano was a donation in memory of Mrs. Jessie Alsup Williams, and in 1975 additional property was secured for the church ground from the Reid Crittenden estate. This afforded a tennis court and photinia hedge. Its centennial anniversary was celebrated in September 1980.

Since 1984, the church has added an adult bell choir and monthly puppet shows for the children to its programs. On December 12, 1993, Pachitla UMC closed its door and its members became part of Shellman UMC. The fellowship hall was renovated in 1996, with the kitchen being remodeled and the interior being repainted and carpeted. 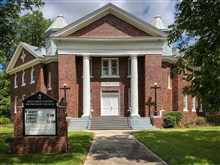