Under the direction of City Missionary, Rev. H. B. Underwood, the Board purchased a four-acre site in the new Winchester subdivision. Property on the east side was to be used as a parsonage and land on the corner of a church. Rev. John McGowan, pastor of Striplin Terrace Methodist Church, preached the first service in a rented house. Before a structure was built, the members worshipped in the chapel of St. Paul, Sherwood Methodist Church, another rented house, and Open Door Community House. In June 1960, Rev. Lamar Bell was appointed to be the first pastor of the newly formed church. The name Epworth was chosen after the boyhood home of John Wesley. The sanctuary/fellowship hall, kitchen, and eight classrooms were completed by Easter Sunday 1963. An additional wing was consecrated on October 11, 1970.

A new parsonage was purchased in 1979. During the early 1980s, church leaders made the decision that the present sanctuary would be a permanent sanctuary. Plans were developed for a complete refurbishing of the existing sanctuary to make it more attractive. This renovation was done in anticipation that a new fellowship hall would be built. In 1984, stained-glass windows were installed and, in 1985, pews replaced metal chairs. Dr. Ben St. Clair directed a fund campaign in February 1987, and plans were completed by October 1987 to build a new fellowship hall. The construction of this building was completed in 1988. It included a hall with seating capacity of 150, kitchen, new Sunday school classrooms, an office for volunteers, office for staff, large narthex, new entrance, driveway to St. Francis Avenue, and parking.

The UMW has sponsored three silent auctions, the last being held in September 2003, to raise money for the building fund. The women have also organized food committees for the bereaved, care packages for nursing home patients, college students, and children at the battered women's shelter. The UMM has a helping hand ministry to help with minor home repairs, bikes and toys at Christmas, and a graduates’ breakfast. 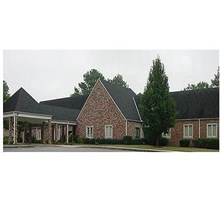