This church, in Laurens County, was begun as an outgrowth of First Methodist and was organized in June 1958. Rev. Ben F. Williams was the first assigned pastor. For the first meetings the Moore Street Elementary School was used, and then they moved to the National Guard Armory while the first unit was being erected. The fellowship hall, offices and fourteen classrooms were ready for service on April 10, 1960. The sanctuary with five more classrooms and a youth center were completed in 1970.

In November 1971, the first issue of the church newsletter was published. Lt. Governor Lester Maddox was the "God and Country" speaker in July 1972. In the early 1970s, a new Allen Digital organ was purchased, the church sponsored a state-wide Youth Encounter Weekend, and several Methodist missionaries spoke at the church. The church choir, youth choir, and drama groups also presented yearly Christmas cantatas. The 8:45 Sunday morning service was started in 1976 and the first Family Night Supper in 1977. Starting in the late 1970s, the church had annual Family Camping Weekends and sent youth and adults on regional and foreign missions trips. In June 1983 the church celebrated its 25th anniversary. In May 1985 the new pastor's office, library, and additional Sunday school rooms were consecrated. A new church van was purchased in 1988. The church dedicated new stained glass windows, pews, cushions and carpet in the sanctuary on September 11, 2011. 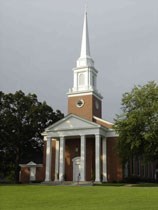