The winter of 1919, Rev. W.A. Tyson, the pastor of the Wadley Charge, learned of the acute need of an organized Methodist Church in the Greenway community of Emanuel County. A revival was held in Greenway School in the summer of 1920. There were numerous converts, but no place could be found to house a regular meeting. Mrs. Dean Lamb readily gave a plot adjoining the cemetery. By September, the church was organized with 62 members. In 1921, a Sunday school was organized which was discontinued in 1946. This church became a part of the Wadley Circuit with Coleman and St. John. In 1950, the entire inside was remodeled. 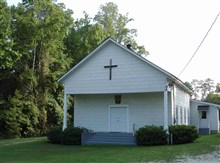