The Jeffersonville Methodist Episcopal Church was established in 1839 and first worshipped in a house owned by Joshua Grantham. Mr. McCoy built the first church building located on West Magnolia Street. Later, a frame structure was erected on the present location of the church, on land donated by Mr. Bob Wimberly. The frame structure had a large porch, supported by columns. Two doors opened into the sanctuary from the porch. Men entered the door on the right and women on the left. The genders were divided by a four-foot partition running down the middle of the sanctuary.

The frame building was replaced by the present yellow brick domed structure in 1918, as a memorial gift from Miss Ella Beckom to her parents, Mr. and Mrs. Fran Beckom. Unfortunately, after the walls reached window-ledge height, construction money ran out. During this time, worship services were held in the old public school building, formerly Auburn Institution. With the arrival of Rev. J. M. Hancock in 1923, construction was renewed and completed in 1924. The bell from the previous church was placed in the belfry. The president of Wesleyan Women's College in Macon, Dr. W. F. Quillian, preached the dedicatory sermon.

At that time, Jeffersonville was part of a circuit which included Beech Springs, Lucy Chapel, Prospect, and Rosebud. In 1967, under the leadership of Rev. Robert Kea, Jeffersonville applied to become a station church, and became one in 1968, with the appointment of C. L. Mincey.

The first parsonage was occupied in 1870. The next parsonage burned in 1895, and the present "old parsonage," a frame structure, was built in 1896 and used until 1968. A new brick parsonage was built on Main Street near the church in 1968. The parsonage was dedicated in 1970, by Dr. Robert Padgett, Macon District Superintendent, under Rev. Jim Jackson's pastorate.

Among the more prominent pastors who have served Jeffersonville were Bishop James Dickey, born in the parsonage in 1864, the son of Rev. and Mrs. J. M. Dickey; Rev. McCoy Johnson, Rev. H. W. Scoates, Jr., and Rev. Mike McAfee, who all became District Superintendents.

Under the leadership of Rev. Barney Philpot, pastor from 1988-1990, a new fellowship hall-education building was funded and built next to the sanctuary. This facility houses the fellowship hall, kitchen, four classrooms, pastor's study, church office, and restrooms. W. M. Foster, a member, and contractor donated his services for the construction. Completed during the pastorate of Rev. Rex Odom, the facility was dedicated in 1990, in a service led by Bishop Richard Looney and Dr. Don Kea, District Superintendent. 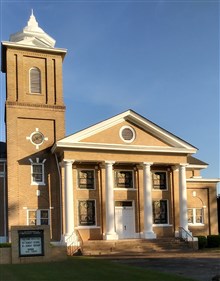