Hillcrest Heights UMC and Lynmore UMC, both located in Macon, merged in 2004 and renamed Heritage UMC.

Hillcrest Heights was organized through the efforts of the Macon Board of Missions, Mr. H. L. Bailey, Dr. George Clary, and Rev. T. B. Stanford. A house was bought to be used as a parsonage and church. Alvis A. Waite, Jr., a ministerial student at Candler School of Theology, was the first pastor to helping to organize the church on October 4, 1943, with twenty-four members. The front two rooms contained the sanctuary and the remaining rooms made up the Sunday school rooms and parsonage. From November 1946 to the summer of 1947, the congregation worshipped in a tent, on the present location, until the basement could be used. In 1954, a major decision turned the existing basement into the educational building and began the building of a sanctuary. In April 1955, it was ready. In later years, the youth center burned down and was replaced with an activities building.

Lynmore’s beginnings started before 1908, when Miss Minnie Hatcher, city missionary, started a Sunday school on the south side of Macon. It was called Beulah Mission. A building measuring fifty feet by thirty-six feet was constructed by Mr. J. H. Curry and paid off in ninety days. The name was changed to Newberg and Rev. H. M. Morrison became the first full-time minister in 1922. Rev. Morrison died four years later and when this building was dedicated, the name was changed to Morrison's Memorial. In 1946, the name was changed, again, to Lynmore for the community which had developed around it. In 1952, a new educational building was built and a wing added in 1954. The N. S. Weeks Chapel, located downstairs in the educational building, was dedicated in August 1979. In 1966, the church began a library with Mrs. W. K. (Mary) Goodwin as the librarian. A room upstairs in the educational building was renovated and named in her memory in 1986. In 1989, the fellowship hall was enlarged, renovated and dedicated in honor of Mrs. I. T. Tanner. His room was remodeled in memory of Paul Brewer in 1990. 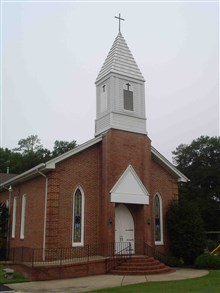