Before 1834, little is known about this church except that a log building burned and a two-story wooden building similar to Midway Congregational Church, Liberty County, Georgia, was built. It was called "Liberty" for Mr. Tinley's home in Richmond County, Georgia. In 1869, the membership was one hundred sixty-eight, ninety-nine females and sixty-nine males, including former slaves. In 1901, a new building was completed and the old one sold to the Masons. It was torn down in 1950, to make space for the educational annex. The church became a station in 1939. The new fellowship hall, the Vinson Building, was dedicated in February 1963, by Bishop John Owen Smith.

In April 1965, the sanctuary was remodeled, including new cushioned pews, carpet, a PA system and a new education building completed. A new parsonage was built and completed in October 1974. The education building and parsonage were dedicated by Bishop Cannon in May 1975. In 1979, the sanctuary was expanded which changed the front entrance of the church. 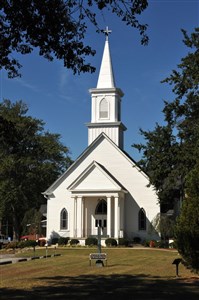