The present building for Carter's Chapel is in Laurens County, east of Scott, Georgia. The original church building was located across the street and was constructed of hand-sawed boards. The church, built in 1885, was named for Mrs. Edith Calhoun Carter, one of the first members.

In 1906, the church recorded 85 members. The church closed for a time and was reopened in 1949. In 1993, Scott UMC merged with Carter's Chapel. As of 2013, the church had services on the first and third Sundays of the month.

Scott UMC - This church, begun in 1910, was in Johnson County. Their building was erected shortly after the church began. In 1919, Scott was head of a circuit of three churches: Scott, Harmony, and Oranna with Rev. G. R. Stevens as pastor. Scott has been on several circuits but has always been in the Dublin District. In 1940, it was part of the Brewton Circuit and, in 1943, on the Scott-Adrian Circuit and on the East Dublin Circuit in 1984. 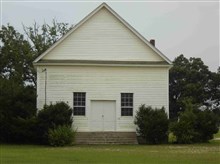