In a one-room log cabin on the farm of Mr. Alfred Breedlove, this church was organized on March 5, 1857. While the first building was being built, they worshiped in a blacksmith shop. The present brick structure was built in 1892 and, in 1908, a brick annex was added. Later, the stained-glass windows of the sanctuary were replaced with scenic windows depicting major events in the life of Christ. This church has been in several Districts: Americus, Lumpkin, Columbus, and Dawson. When Dawson was head of a district, the presiding elder had his home here and for a while after Dawson was reassigned to the Americus district.

In the 1980s, a lot adjoining the church was donated and a ramp, drive, and canopy were constructed. Extensive repairs were also made to the sanctuary, including the installation of Lexan, a protective cover for the stained glass windows, and a children's playground was constructed. During the 1990s, renovations for the Gladys Newman Women's Center were funded by the sale of a cookbook, A Standing Invitation to Gracious Southern Living, published by the church UMW. New central heat/air conditioning, carpet, paint, and lighting were also installed in the sanctuary. In 2004, a church minibus was purchased and the sanctuary organ completely refurbished and moved to a new location on the north side of the sanctuary. In 2009 and 2010, the Gladys Newman Center was renovated, a new computer for the youth and a new office copier were purchased, replacement of the parsonage heating/cooling system and roof repairs of the church and parsonage completed. On October 3, 2010, the church celebrated 118 years of history. In June 2014, the church was moved from the dissolved Americus District to the newly organized Northwest District.

During 2015, the church continued family night suppers, Bible study, MYF, and Yah-Yahs (Young at Hearts) along with a very successful June Bible School. Major projects included replacing the sanctuary roof with architectural shingles, repair of the steeple, and construction of a larger fenced playground for the children. In September, the church hosted a Prayer and Support Hour for our Law Enforcement and Public Officials and held Homecoming on October 4. 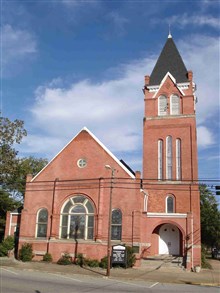